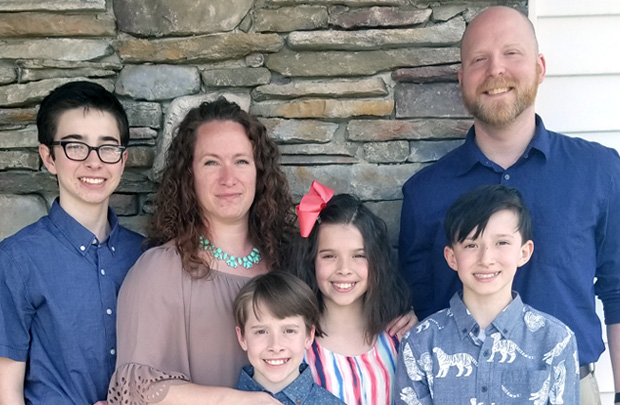 “It amazes me how close we were to missing out on the gift these children are to us and to our entire family—all because of a little fear.”

Wendy and Joey Garren didn’t plan to adopt four children. When they were licensed to adopt, they told their worker that they would like to adopt one, or possibly two, little girls.

But over the course of a year of fostering—and after seeing the negative effect that being separated from siblings had on a brother and sister in their care—Wendy and Joey changed their plan and decided they would focus their search on siblings.

“We told our caseworker, and two days later, she called saying that she had a group of four children for us to consider. And I said, are you crazy? I can’t do four kids. That’s insane!” Wendy said.

But Wendy couldn’t get those kids out of her mind. She and Joey talked it over, and after a week, decided to get more information and meet the children.

“Again, on the drive to their group home, doubt set in,” Wendy said. “We almost turned around and cancelled the meeting, but our wonderful caseworker said, ‘You never know, they may be your kids.’”

At that first meeting, Wendy realized that the social worker was right.

Wendy and Joey spent about two hours with the children. They were the first potential parents the children had met. The oldest, who was 11 years old, spent most of the time trying to hide.

“I could see the hurt in him, and I wanted to do something to help,” Wendy said. “By the end of our meeting, he was asking to play basketball with me!”

Five months later—right before Christmas 2015—the children moved in. A year and a half later, they officially became a forever family.

“We were scared at first—we couldn’t believe that we were adopting four kids. But as my youngest says, it takes a crazy person to adopt four kids! I guess we were the right kind of crazy,” Wendy said.

Wendy says that the last three and half years have been full of growth and learning for everyone.

“The kids had to learn to trust. To be brothers and sister again. To be kids! Especially our oldest, who was in something of a parent role. But an 11-year-old is not a great father.”

Wendy and Joey have learned that they were a lot stronger than they thought we were. And that sometimes you don’t know what you are looking for until you find it.

“It amazes me how close we were to missing out on the gift these children are to us and to our entire family—all because of a little fear.”

Read more about the benefits of adopting siblings and the importance of keeping them together on our website.