“The biggest leap of faith I’ve ever taken” 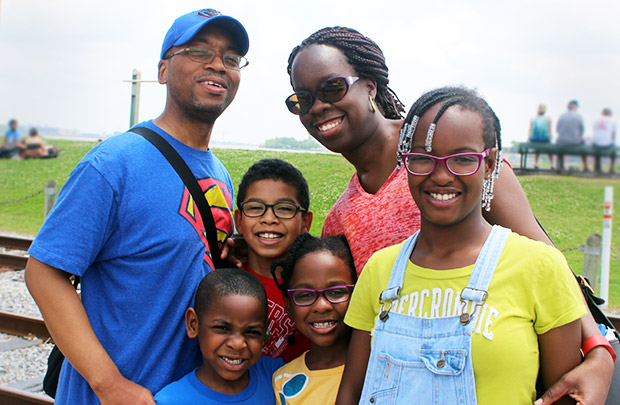 A mother shares her story of adopting four siblings in this guest blog post.

My husband, Hernandes, and I had been married for eight or nine years before we started talking about adoption. We’d traveled and done all sorts of wonderful things together. We were ready for a new adventure.

We contacted at least eight agencies—going to open houses and information sessions—before deciding that adopting from foster care made the most sense for us. At this stage in our lives, we certainly did not want to have a baby! And we wanted more than one child.

We got licensed to adopt two children. That was what we thought we were doing. But one day Hernandes saw a profile of a group of four siblings on AdoptUSKids. He told me: “I think these are our kids!”

My first response was: You’ve got to be kidding! We aren’t even licensed for four. Who’s going to give us four kids?

Hernandes was adamant. I relented. We put in an inquiry. I thought, maybe we won’t hear back. But we did!

It seemed like only days later that we met with the kids, their social worker, and their foster mom. The kids were cute and all. But there were four of them! The twins were two years old, their older brother and sister were four and six.

I told their worker and foster mom right up front that I was worried about going from zero to four young children. Their foster mom must have been in her 80s, and she was caring not only for these four children but also for her grandkids. She told me: “If I can do this, you can do this.”

Our social worker got us relicensed for four children in a matter of weeks. We started weekly visits. Hernandes started painting rooms and looking at furniture. Usually a calm, measured man, he was excited in a way I had seldom seen.

Hernandes’ response to all of my questions was consistent and simple: “This will work. These are going to be our kids.”

And you know what? It turned out he was right.

The school up the street had one spot left for the oldest. Hernandes’ cousin, who does day care, was able to care for the younger three. My mother was beyond excited to become a grandmother. My employer offered adoption leave. My colleagues were supportive.

The kids moved in between Thanksgiving and Christmas of that year. I did take adoption leave while they settled in, but they adjusted more quickly than anyone imagined they would. Partly, I think, because they were adopted together and had each other. Also because they had an instant extended, loving family in my mother, sisters, cousins, and church family.

They lived with us for three and a half years before we were able to finalize their adoption in 2016. But it feels like they’ve been with us forever. Have we had challenges? Of course—they are children! But never a regret.

Opening myself up to the idea of being their parent was the biggest leap of faith I’ve ever taken. Sometimes, it seems like someone else’s story! But I’m eager to tell it so that other people—especially African American families—will see that our story can be their story too.

Read about the benefits of adopting siblings, and the importance of keeping them together, on our website.