“It’s not always easy…but it’s totally worth it.” 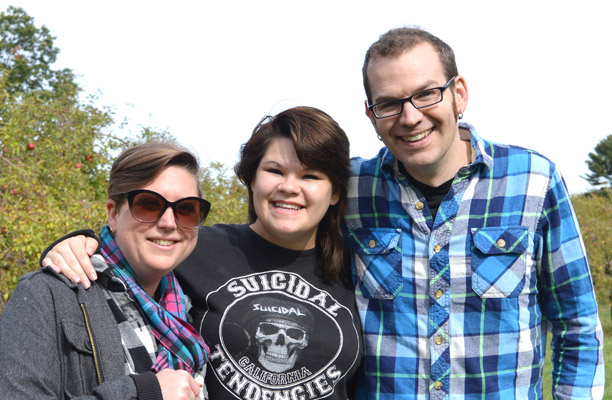 “It is an honor and a joy to support our daughter in becoming the person she dreams herself to be.”

Megan was 16 years old and had been in foster care for more than seven years when she met the couple who would become her parents: Amy Clark and Scott Thomson.

On the day they met, at an adoption party held at a furniture store near their home in Massachusetts, Megan was not feeling festive—or optimistic. In fact, Megan’s social worker later told Amy and Scott that Megan and her friend were lying on a mattress in the beds section saying that no one would ever be interested in adopting a teenager and they should just give up hope for a family.

Then, Amy and Scott’s social worker interrupted them with an invitation to come over and talk.

It was not the first time that Amy and Scott saw Megan. They had seen her profile and video on a Massachusetts adoption website and were struck by Megan’s outgoing personality and intelligence. But what really won them over was a moment in a Wednesday’s Child video when Megan grabbed the microphone and proclaimed that more people should adopt teenagers because teens need and deserve families too!

“When we saw her online, Scott and I thought: this is a young person with a lot of personality, who’s smart, empathetic, and a really good self-advocate. Turns out we were right,” Amy said.

Megan in person was every bit as smart, dynamic, and personable as she was online. In fact, at the end of the adoption party, as Amy and Scott were trying to locate an exit, Megan ran up to them to invite them to her upcoming chorus concert. By the time they attended that concert, Amy and Scott had already completed the process necessary to start parenting Megan—by first visiting with her at the program where she lived, and then on overnight weekends, and finally by welcoming her into their family home.

Playing to their strengths

Amy is a professor at a local college, where she works with many teens who are or have been in foster care. She and Scott had been married for 10 years before they seriously considered having children.

“We hit a time in our lives when many of our friends were having babies, so we were spending a lot of time with children. We realized that we love infants. And we really enjoy teenagers. But we have no idea what to do with them in the years in between!” Amy said.

As Amy and Scott looked into adoption, they learned about the poor outcomes facing youth who age out of care and the great need for parents to adopt them. Believing that they could play a role in helping a young person change the course their own life, they decided to take the plunge. Megan was the first teen they met.

Megan moved into the family’s home in the winter of 2015, four months after the adoption party. Together they began the hard work of building a family.

“It’s not easy to bring someone into your family and establish bonds with them. But it is totally worth it. It’s really fun to watch these kids grow and change. And a lot of times it’s not fun, but even then, it’s the right thing to do,” Amy said.

There were a multitude of transitions for Amy and Scott—getting used to cooking, cleaning, and providing transportation for someone else, creating new family routines and traditions, setting appropriate boundaries, and establishing a child-focused life. But throughout, they knew that Megan worked harder than anyone to make a good life for herself with her new family.

Six months after Megan moved in with them, her social worker came over with some big questions. Did Amy and Scott still want to adopt Megan—and if so, when?

Amy and Scott said, “Of course we still want to adopt Megan! It has always been clear to us that she is our daughter.  We love her and we will all be family forever.” They left it to Megan to select the date. She chose October 30th: the anniversary of the day she came into foster care.

“I think that when Megan chose her adoption day, it was her way of reclaiming a day something really terrible and really scary had happened. Now, that day means something more. It is also the date that we became a legal and irrevocable family, and amidst all the loss, it symbolizes hope and love,” Amy said.

This summer, Megan turned 18. In June, she will graduate from high school. She is busy laying plans to attend college next fall, and Scott and Amy can’t wait to throw her a graduation party and help her with whatever comes next.

As Amy looks back on the family’s first couple years together, she is amazed by the number of firsts that the family has shared—holidays together, Megan’s first job and first paycheck, first days of school, and Megan climbing a tree for the first time ever. And she continues to marvel at the person that Megan is—and will become.

“Our daughter is one of the most courageous people I have ever met. She gets up every day and lives her life and reaches out and cares about people, even when things are really hard. It is such an honor to watch her do that, and a joy to support her in becoming the person she dreams herself to be.”