“It was like watching a butterfly come out of a cocoon” 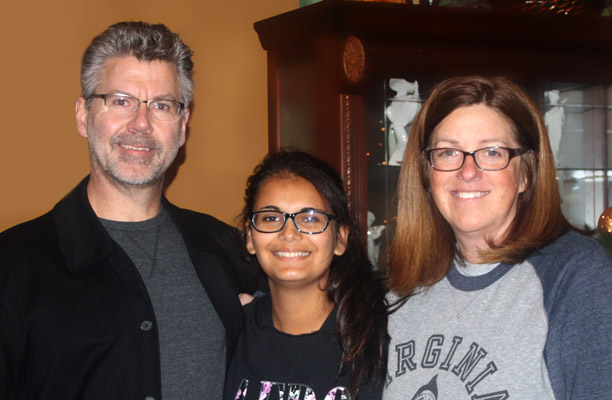 Staci and Eric Dennis met Kylie through the AdoptUSKids website.

Staci Dennis learned about the fate of teens aging out of foster care when she was a reporter working the municipal court beat at her local paper. She noticed that a teenage boy kept getting parking tickets, and she wondered why.

It turned out that the teen had just graduated from high school and aged out of foster care. He was living in his car until he could move into college dorms in the fall.

“He was lucky. He was extremely smart and motivated. But he was homeless because he did not have a support system,” Staci said. “It made me wonder how anyone makes it through life alone like that.”

Staci and her husband, Eric, decided they would try to ensure that at least one person did not go through life without a family.

Staci and Eric went to adoption classes and got licensed in Virginia. They found Kylie, the teenager they would ultimately adopt, on the AdoptUSKids website in March 2014.

Kylie was 12 years old and living in Idaho when Staci and her husband saw her profile. Kylie had spent her entire life in foster care—living with relatives, with foster parents, or in group homes.

Staci, Eric, and Kylie started communicating on Kylie’s 13th birthday through phone calls, letters, and Skype. Staci sent Kylie a PowerPoint slideshow so that Kylie could see what their house looked like and a little about life in Virginia.

In June, Staci and Eric flew to Idaho to meet Kylie. The visit went well. Before they left, Staci started planning Kylie’s trip to Virginia the next month.

“I was determined to keep things moving. I did not want delays. Kylie had excellent caseworkers, and so did we. But once we realized that Kylie was going to be our daughter, I pushed so that the adoption would be done as quickly as possible,” Staci said.

“The first six months were the hardest”

Staci and Eric had learned in training that a teen’s transitioning into a new home might test their boundaries and test their parents’ commitment to them. Still, they were surprised by some of Kylie’s behavior.

“When we were in training, I thought some of the things they told us were just ridiculous! I would sit there thinking, ‘There’s no way that a teenager would do that!’ But they were right. And I went back to the training manual for guidance,” Staci said.

Staci says that she and Eric soldiered through those first six months by remaining focused on their commitment to Kylie and providing the consistency and structure she needed to overcome the trauma of her past.

“Twice a day, Eric and I had strategy sessions. Each morning, we went over our game plan for the day ahead.  Before we went to sleep, we reviewed how things went that day,” Staci said.

On one particularly rough day about six months after Kylie had joined their family, everything came to a head.

“Kylie pitched a fit. We had a talk,” Staci said. “We told her: ‘It’s a hard place where you are. But you have to decide that you want to be better. You can do that. You have the power to do that. And we’re going to help you.’ ”

Looking back, Staci says that while things had been gradually improving, that conversation was the turning point. Kylie told them that she didn’t want to feel that way anymore. After that day, Kylie gradually started letting her guard down and opening up to new experiences and feelings.

It has been two years since Staci and Eric adopted Kylie. Staci says that the most rewarding thing has been watching Kylie go from a being a frightened, neglected person who was living her life “in defense mode” to a teen who enjoys her life, looks forward to things, and tells Staci and Eric that she loves them every night before she goes to bed.

“Seeing her come here so broken and watching her grow out of that in a two-year period. It’s like watching the butterfly come out of the cocoon in fast motion,” Staci said.

Are you looking for a way to change a child’s life? Read more about why teens need families—and how that family could be yours—on our website.