“If you can provide a safe, happy home, the door is wide open.” 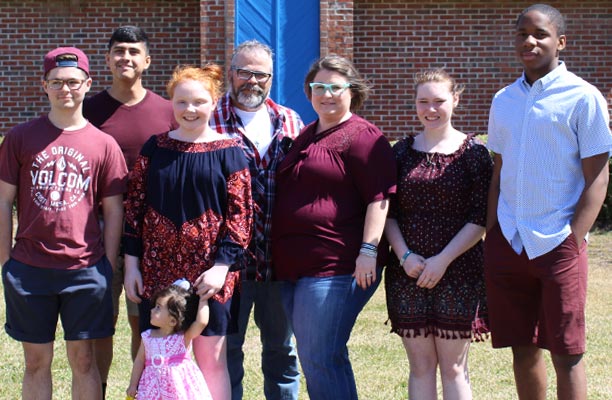 “If we’d stuck to our plan never to adopt a teen, we wouldn’t have any of our kids.”

By the time she was a teenager, Jennifer Allred already knew she wanted to adopt one day. So when she and her now-husband Mike were dating, she made sure to tell him that. “I let him know then that that was my plan and that he had to be okay with it,” she says. He was.

After they had their biological son, Jacob, they began to talk about expanding their family.

“We were going to adopt one child, and they were going to be between two and five years old,” laughs Jennifer. “The Lord has a sense of humor! None of that happened.”

Instead, they met Andrew (now 23), who came to them on his 18th birthday. They were his sixteenth placement.

“He was a very soft-spoken kid, and he ate a lot,” says Jennifer. “We were intimidated, nervous, and definitely insecure in our ability to parent a teenager. But we found out very quickly that Andrew was just a normal teenager in an abnormal situation.”

Their first son by birth, Jacob, was nine at the time, “and we weren’t sure if he would be okay with it,” Jennifer said. “But he has a very big heart and is very sensitive to others.” He welcomed a new brother.

If you know how to show a child love and compassion and are willing to invest the time and provide a happy home, you’re three-quarters of the way there. Click To Tweet

After Andrew came to live with them, Jennifer met two teens, Amber (16) and Misty (13), through the family practice where Jennifer works. The girls, who were at the doctor’s office for a checkup, had been in foster care since they were 5 and 8 years old. Jennifer felt that the sisters might one day become their children, too.

“There was just a connection. I got the feeling of being drawn to them,” Jennifer said.

A year later, Jennifer and Mike learned that Amber and Misty were legally-free to be adopted. And in 2013, they adopted Andrew, Amber, and Misty.

Adapting to changes as they come

“I remember when we first started to talk about having children my first instinct was “how are we going to afford a baby?” says Mike. “But if you wait until you know you can do it, you’ll never have one. It’s the same with adoption. If you know how to show a child love and compassion and are willing to invest the time and provide a happy home, you’re three-quarters of the way there. If you’ve got those qualities, you’re already ready to adopt, and you just have to adapt to the changes that come.”

This year, one of those changes is that Jennifer and Mike are becoming legal guardians to a 16-year-old boy and twin girls. It’s another surprise they are now able to take in stride.

“We learned not to put ourselves in a box of wanting to adopt a male, female— newborn or other age—or a child who has or hasn’t had something happen. If we’d stuck to our plan never to adopt a teen, we wouldn’t have any of our kids,” Jennifer said. “So my advice is not to confine yourself to the small limitations of what you think you can handle.”

The rewards of parenting

In return, Jennifer and Mike say parenting has brought them rich rewards. “I think the greatest reward that I have gotten through foster care and adoption is just learning to be a better parent,” says Jennifer.

Mike is grateful to feel he is making a difference in a child’s life. He says that happens slowly, over time, while working through challenges together.

“When you finally see the breakthrough that maybe you have struggled to have with the child, and you start feeling their confidence in you, it’s so rewarding.”