“Being loved has taught me how to love” 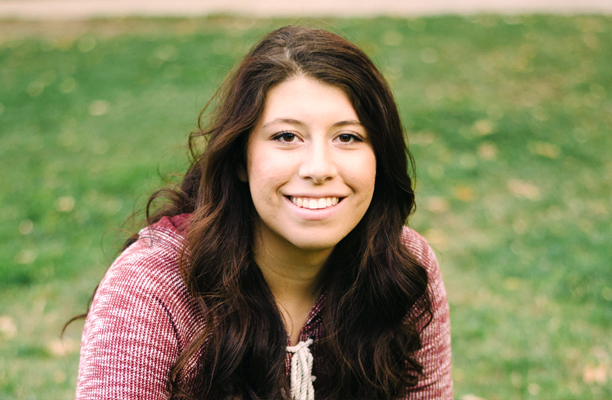 “My parents care about me more than anyone ever has, and that means the world to me.”

Aria Williams spent eight years in foster care before being adopted when she was 16 years old. Today, Aria is a freshman in college. She hopes that her story will inspire people to think about adopting teens.

You were just a few years away from aging out of care when you were adopted. Did you ever give up on having a family?

Ever since I was eight and placed into the foster system, I wanted a family. In theory, I had several. But it always felt temporary. I never thought I would get a “forever” family.

Not having a family was hard because I didn’t have what all of my friends had—simple things like family vacations, photo albums, and baby pictures. I was so envious of people who had these things and who felt comfortable around their parents, because I was constantly struggling to fit in to my foster homes.

Two years ago, when I least expected it, my adoptive parents came into my life! I met them through church. They were youth leaders and would drive me to church activities. When I found out I was going to have to move out of the foster home I was in, they were in the process of getting their foster license, so the timing was perfect.

Teens in foster care are strong, resilient, and smart, and, given the chance, they can overcome their past and influence the world for better.
Click to tweet

How has being adopted changed your life?

My parents are my biggest fans. They are the first people I tell when good things happen and the first people that know when something’s going wrong. They care about me more than anyone ever has, and that means the world to me.

Being loved by my parents has taught me how to love. It has also given me a support system, which is still important now that I am away at college.

What would you say to people who think that teens don’t want or need to be adopted?

I would say, give them a chance…or two…or twenty. Being in foster care is hard!

My teenage years were filled with a lot of anger, attitude, and sass. I could never figure out how to deal with my emotions because I had a hard time trusting people.

Looking back now I realize that I was not very nice to my foster parents or my caseworkers. Being in foster care forced me to build a wall inside of myself that helped me block my emotions from others and push people who cared about me away. But beneath it all, I longed for a family.

How did your parents help you tear down the walls you built to protect you?

My parents helped me by allowing me to express myself without judgement and loving me for who I was. They saw the potential in me that I could never see myself. They realized my past was hard, and they gave me the space and support I needed.

My parents would always tell me they loved me and give me lots of hugs. I really needed affection, so hugs and kind words helped me to open up to them. It took time, but slowly the walls I had built were torn down.

Any final thoughts for people who are thinking about adopting a teen?

I absolutely believe that adoptive parents can help teens overcome the trials of their past. Everyone needs the support and love of a permanent family; it is the most basic unit of society. Teens in foster care are strong, resilient, and smart, and, given the chance, they can overcome their past and influence the world for better.