A couple’s patience pays off 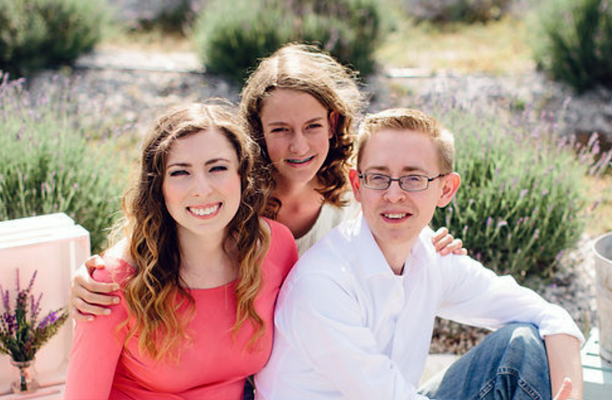 “When we talked to Lora that first day, we knew we were talking to our daughter.”

Sherri and Jonathan Bolding were certain they wanted to have children. But they were open to how it would happen. After trying to conceive for several years, they decided that adoption from foster care would be their best route to parenthood.

Though they were not in a hurry to adopt, some of the responses they received to their inquiries made them start to question whether adoption was for them.

“I spent time in foster care as a child, and we had several people tell us that parenting a child with trauma in their background would trigger my own trauma,” Sherri said. “That, and the workers’ focus on our lack of experience as parents, made us start to think that maybe this wasn’t going to happen for us—that maybe we were never going to have kids,” Sherri said.

The Boldings decided not to renew their home study when it was set to expire the following spring. Then Sherri learned that they could create a family profile that children’s workers could see on AdoptUSKids. They decided to give it a try.

Within a week of completing their registration on AdoptUSKids, Sherri started receiving messages from children’s caseworkers. One of the first was from a worker in Washington State who thought they might be good match for a Lora, a 12-year-old girl who had been in foster care for two years.

Sherri immediately sent their home study to Lora’s worker, who responded with more information. It turned out that Lora struggled with some of the issues that Sherri had as a child.

“Part of the reason that Lora’s worker chose us was because I had experienced some of the same trauma that Lora had. Rather than seeing my background as a source of concern, she saw it as a strength,” Sherri said.

Sherri and Jonathan continued to share information and communicate with Lora’s caseworker and soon initiated the interstate adoption process.

Five months later—three days before Mother’s Day—Sherri and Jonathan were notified that both states had signed off and they could finally talk with Lora.

“Before we ever made an inquiry we made a commitment that the second a child either spoke to us or saw us, that would be our child. We would not back out—no matter what. When we talked to Lora that first day, we knew we were talking to our daughter,” Sherri said.

Sherri and Jonathan flew out to Washington for a whirlwind three-day visit with Lora. Sherri says that while she tried to contain her excitement, when they walked into the visitation room, her emotions took over.

“I was meeting my child for the first time. She was all I could focus on. I forgot that her worker was in the room, that my husband was in the room. I probably forgot my own name!” Sherri said.

Sherri gave Lora a hug that almost knocked her over, and soon the three were off to spend their first weekend together. Everything went well, until they had to leave. Lora melted down.

“I was scared I would never see them again,” Lora said. “I had learned not to trust adults. Normally when people made promises and said they were going to do things, they didn’t.”

Sherri and Jonathan gave Lora a gold sea star pendant as a symbol of their promise to her: They would be back in six weeks.

Three months later—nine months since Sherri received that first email from a hopeful caseworker in Washington State—Sherri came back to Washington a second time to fly Lora home to South Carolina.

Lora’s adoption was finalized in April of 2017. The family celebrated with a meal at Lora’s favorite restaurant and gave Lora an adoption present of her choosing: a new dog they named Beauty.

While there have been bumps in the road, Sherri says that even after the initial honeymoon period, Lora’s transition to a new state and permanent family has mostly been a smooth one. And, she says, now she and Jonathan know why they had to wait so long before they were able to adopt.

“I believe we were meant to be told “no” all those years, because even though we were ready for a child, Lora wasn’t ready for us yet.”